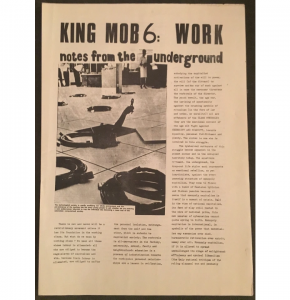 Complete run in 5 issues (no.4 was never published) of this legendary British counter-culture magazine King Mob Echo, put out by David & Stuart Wise, later joined by Christopher Gray, Donald Nicholson-Smith and TJ Clark (all former members of the British Section of the Situationist International).Also included here is a leaflet listing all King Mob publications.

Our final visit, to Paris to meet Guy Debord and other Paris-based Situationists, would decide whether Chris and I would join L’Internationale situationniste, as we hoped, or whether we would be dismissed, hurled centrifugally into pro-situ orbit, like countless others before and after… We spent most of our time in a typical, old Paris apartment in rue St Jacques, small, comfortable and over-crowded with Situationists. Wine was poured immediately and often. Whenever you stood your head was thrust into a richly aromatic Gauloise cloud. Guy, no longer the studied left-bank dandy of the much-used early photograph with Pierre Feuillette, had put on some weight, was noticeably more jowly and had adopted an altogether more anonymous sartorial style…

Guy, revelling in being the centre of devoted attention of assembled Situationists and would-be Situationists, was at his most urbane, amusing and charming. His talent for vituperation was evident. Most denizens of the French left and cultural avant-garde seemed, almost to a person, to qualify as “stupid, completely cow-like, little cunts”, “cretins” or “imbeciles”. In London it tended towards ‘peace and love, man’, so this flood of scurrilous epithets was both slightly shocking and undeniably refreshing, particularly since the squibs were delivered with a sense of humour. He meant it, but they were also delivered as lines for assenting nods and laughter of the attendant gallery, which included not only his former long-term companion and co-worker, Michelle Bernstein, and his current companion Alice Becker-Ho, a beautiful French-Chinese woman, but Mustapha, René Vienet, Donald Nicholson-Smith and his very attractive girl friend Cathy (Pozzo di Borgo). (There was no sign of Debord’s ‘austere cell’ so elegiacally rhapsodized by the aesthete Tim Clark in his introduction to Anselm Jappe’s Guy Debord.) Much, but not all of what Debord said was too quick for me but was invariably greeted with rapid assent or appreciative laughter from the assembled Sits.

We drank a lot, ate well, talked a great deal (in my case mostly with Michelle Bernstein, who spoke good English and was highly sympathetic, intelligent, widely interested and attractive, and Donald, the bluff, bearded and affable established English member of the group), and wandered around Paris. We enjoyed potato and onion soups at Les Halles and ate horse steaks and cous-cous in Algerian restaurants near the Gare du Nord. Perhaps it was the wine, but I began to feel more relaxed in this strangely rarefied world. I would have loved a joint, though.

‘The form corresponds to the content. It does not describe this or that particular activity (merchant marine, oil exploration, some historic monument to admire — or even to demolish, as in Franju’s magnificent Hôtel des Invalides, but the very core of present-day activity in general, which is empty. It is a portrayal of the absence of “real life.” This slow movement of exposure and negation is what I was trying to embody in Passage. But very summarily and arbitrarily, I must admit. Despite the prevalent fixation on the economic obstacles, the main problem is actually that short films are quite unsuitable for truly experimental cinema. Their very brevity tends to encourage a moderate, neatly edited form of expression. But it does seem interesting to detourn the fixed form of the traditional documentary, and this tends to tie us to the inviolable 20-minute limit.’

The members and fellow-travelers of the Letterist International were young; nearly all of them in their teens or early twenties. These “lost children” (les enfants perdus) were of the generation who had grown up during the Nazi occupation (some of their parents had been Jewish deportees or Maquisards), but had been too young to fight in the resistance. Their youthful radicalism had been betrayed by the re-imposition of “traditional” conservatism on French society, with its authoritarian penal code and reactionary clericalism, its Gendarmarie who had in large part collaborated with the Nazi occupiers, and its conscription of French youth to fight imperialist wars in Indo-China and Algeria. They also felt betrayed by the bureaucratic class-collaborationism of the Communist Party, the ineffectiveness of Trotskyism, and the recuperation of the Surrealist avant-garde by the culture industry. The headquarters of the new international was a bar in the Arab quarter of Paris’s Left Bank. According to one of the regulars, Elaine Papai (who married Jean-Louis Brau, the Letterist poet):

‘The life of the Situationist International cannot be disentangled from Saint-German-des-Prés and the climate that once reigned in that neighbourhood. The Letterist International had set up its headquarters at Moineau’s, a low dive in Rue du Four where the letterists were joined by hitherto unaffiliated young revolutionaries. Drugs, alcohol, and girls (especially underage ones) were part of the folklore of the Letterist International, as revealed in certain slogans of that time which, curiously enough, reappeared on the walls of Paris in May 1968. “Never Work!” “Ether is freely available,” or “Let us live!”’

Another young woman of the group, the Australian artist, Vali Myers, recalls,

‘They were the rootless children from every corner of Europe. Many had no home, no parents, no papers. For the cops, their legal status was “vagrant.” Which is why they all ended up sooner or later in La Santé [prison]. We lived in the streets, in the cafes, like a pack of mongrel dogs. We had our hierarchy, our own codes. Students and people with jobs were kept out. As for the few tourists who came around to gawk at “existentialists,” it was all right to con them. We always managed to have rough wine and hash from Algeria. We shared everything.’

Unlike the rest of the avant-garde, the LI refused to be “answerable” to the court of art criticism and the gaze of the “other,” refused to seek fame, and refused to market anything they produced. The LI’s mimeographed journal Potlatch, which appeared in 20 issues between June 1954 and November 1957, with an eventual print run of 500 copies, was always given away free to friends of the group, or mailed to people who expressed an interest.

The Letterist International’s theory of “unitary urbanism” was first formulated by the nineteen-year-old Ivan Chtcheglev in a 1953 article in Potlatch. Unitary urbanism expressed a vision of city planning based on aesthetic and technological innovations in architecture, but freed from subordination to the needs of corporate developers and the endless expansion of private car ownership. “Psychogeography” – “the study of the specific effects of the geographical environment, consciously organized or not, on the emotions and behaviours of individuals” – involved the “derive,” a form of daydreaming during Letterist excursions on foot through the urban environment, defined as “a technique of transient passage through varied ambiances.” Such pleasurable activity had yet to be impoverished by the pollution and noise of traffic jams, and the vandalism of planners and developers. Chtcheglev could still write of a future in which city dwellers would reclaim the streets: “we will construct cities for drifting… but with light retouching, one can utilize certain zones which already exist. One can utilize certain persons who already exist.”

This “first phase” of the LI lasted until 1954, when Debord moved the headquarters from the nihilist atmosphere of the Rue du Four to another bar, this time on the Rue de la Montagne Sainte-Geneviève. But, for Debord, that early phase of the LI, in which the bloom of youth, like the old Paris Left Bank, passed by them before it could even be seen as what it truly was, was the “golden age” of real struggle and potential; and it is this, rather any utopian vision of the future, that haunts all of his subsequent work. As Kaufman points out, in the Society of the Spectacle, written fifteen years later (1967), the first thesis states that in a world in which “all that was once directly lived has become representation,” the “separation from, and disappearance of, life has become perfected.” By 1968, when the streets of the Paris were once again fought over, the city of the Letterists had disappeared and its utopian urbanist potential had already been destroyed.

In 1954 the celebrated Danish painter Asger Jorn (1917-73) became aware of the existence of Potlatch and the Letterist International, and made contact with Debord. Jorn, who had founded the International Movement for an Imaginative Bauhaus in 1953, shared the LI’s hostility to abstract expressionism and socialist realism, and saw their concepts of unitary urbanism and psychogeography as in line with of his own critique of functionalist design and architecture. Constant Nieuwenhuys (1920–2005, known as “Constant”), the Dutch artist friend of Jorn, was also coming into the Letterist orbit. In 1948, Constant’s Manifesto for the Dutch Experimentalists, who later became part of CoBrA group (Copenhagen- Brussels-Amsterdam), argued:

‘A new freedom will be born that will allow mankind to satisfy its desire to create. Through this development the professional artist will lose his privileged position. This explains the resistance of contemporary artists.’

Debord’s new friendship with Jorn, Constant and other leading figures of the artistic avant-garde had convinced him that the time had come for the Letterists to shift their focus from the bars of Paris to developments in the wider cultural field of struggle. In an article published in Potlatch in 1957, entitled “One Step Back,” Debord argued that the LI, rather than constitute itself as an “external opposition,” needed to “seize hold of modern culture in order to use it for our own ends” and join forces with artists – even painters, whose activities has been generally despised by the Letterists. Debord accepted that the LI might have to initially settle for a minority position within a new international movement; although, he thought, “all concrete achievements of this movement will naturally lead to its alignment with the most advanced program”:

‘…we need to gather specialists from very varied fields, know the latest autonomous developments in those fields.. We thus need to run the risk of regression, but we must also offer, as soon as possible, the means to supersede the contradictions of the present phase through a deepening of our general theory and through conducting experiments whose results are indisputable. Although certain artistic activities might be more notoriously mortally wounded than others, we feel that the hanging of a painting in a gallery is a relic as inevitably uninteresting as a book of poetry. Any use of the current framework of intellectual commerce surrenders ground to intellectual confusionism, and this includes us; but on the the other hand we can do nothing without taking into account from the outset this ephemeral framework.’

Debord added that the LI needed an expansion of its “economic base.” He was well aware of the huge amount of money being made out of art by the artists themselves as well as the curators and galley-owners. Debord’s potlatch anti-book, Mémoires, consisted of collages produced in collaboration with, and financed by, Asger Jorn (whose financial support for Debord’s work continued long after Jorn decided in 1961 that he could not reconcile his working life as an artist with Debord’s organizational demands).

In July 1957 at the conference in Cosio d’Arroscia, Italy, the Situationist International was founded. Those attending the were: Guy Debord and Michèle Bernstein of the Letterist International; Giuseppe Pinot Gallizio, Asger Jorn, Walter Olmo, Piero Simondo, Elena Verrone of the International Movement for an Imaginist Bauhaus; and Ralph Rumney, representing the London Psychogeographical Association (of which he was the sole member).