“I recommend this book; it is more historically accurate than earlier books on this subject.” – Tim Scully, underground chemist of the 1960s who produced “Orange Sunshine” LSD (featured in Cosmo Feilding-Mellen’s documentary film, The Sunshine Makers). 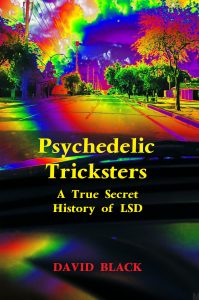 Psychedelic Tricksters: A True Secret History of LSD by David Black (BPC Publishing, London: 2020) is available as a Kindle ebook for £4.85 HERE

And in paperback dead-tree-format for £11.99 HERE

Read the PREFACE for FREE on this site HERE