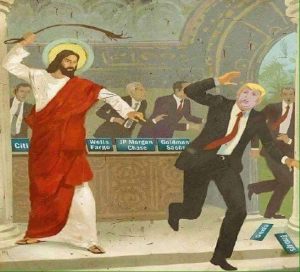 How Socialist is Christianity? How Christian is Socialism? In his book, The Anti-Christ, published in 1888, Friedrich Nietzsche wrote:

“Whom do I hate most heartily among the rabbles of today? The rabble of Socialists, the apostles to the Chandala, who undermine the workingman’s instincts, his pleasure, his feeling of contentment with his petty existence—who make him envious and teach him revenge…. Wrong never lies in unequal rights; it lies in the assertion of “equal” rights…. What is bad? But I have already answered: all that proceeds from weakness, from envy, from revenge. — The anarchist and the Christian have the same ancestry.”

This “ancestry” is recognised by modern anti-socialists such as the atheist/nihilist followers of the late Ayn Rand. However, the 21st century evangelists who worship “pagans” such as Donald J Trump seem blind to it, out of fear if not ignorance.

On the Left, “materialists” have always relied on “science” to dispel religious superstitions and religion. There are however,  interesting exceptions.

The following text is an extract from a three-part essay published in 1850 in the Democrat Review, monthly journal of the the left wing of the British Chartist movement. The author was Helen Macfarlane, Chartist, Feminist and Communist (1818-1860). In 1850 she translated Marx and Engels’ Communist Manifesto. Marx, who was not easily impressed by anyone, described Helen Macfarlane  as a “rara avis,” possessed of “original ideas.”

From the Democratic Review, June 1850

Apropos of Certain Passages in No.1 of Thomas Carlyle’s Latter‑day Pamphlets by Helen Macfarlane

What a noble idea is this theoretical and practical freedom of man, his infinite possibilities—which lies at the bottom of the Christian myths and sagas, and has now assumed the form of Democracy! A noble idea, but—good heavens! What a miserable, contemptible reality.

All sects hedge me in with limitations. I cannot move a step in any direction without running against some creed, or catechism, or formula, which rises up like a wall between the unhappy sectarians and the rest of the universe; beyond which it is forbidden to look on pain of damnation, or worse. No sect has ever yet raised its voice against the iniquitous inequality obtaining between the different ranks of society, whereby the accident of birth alone determines whether a human being shall have the culture necessary to develop his moral and intellectual powers — the culture without which he cannot obtain dominion over his animal wants and appetites, but must remain — like a beast — under the sway of instinct. No sect, whether established or dissenting, has ever protested against the social arrangements, in virtue of which the existence of such human brutes as that poor boy lately discovered in the diocese of the Bishop of London, is permitted — I almost said — no — but encouraged, and indeed made inevitable.

Yet such a state of society is as much opposed to the Christian idea of universal fraternity as the Hindoo institution of caste. With us the poor are the Chandalas, the unclean outcasts of society, which ignores their very existence, unless it be to punish them for crimes, the commission of which society ought to have prevented by providing all its members — first, with the means of comfortable subsistence; and secondly, with the means of moral and intellectual cultivation. Hypocritical teachers of Paganism in the guise of Christianity!

Have done with this preaching and prating about things which you scarcely even profess, and undoubtedly do not practice. You talk of the “visible church of Christ”, but you do all in your power to make it an extremely invisible church. Some of you talk much about certain persons whom you call the “Fathers of the Church”, but if these venerable fathers could become cognisant of your proceedings, they certainly would refuse to acknowledge you for sons. For it impossible to find any two things more opposed than the doctrines concerning justice and brotherly love taught by the ‘Fathers’, and the system pursued by you. If these worthy men were to rise from the dead, they would be found in our ranks; they would be Democrats, Demagogues, Socialists, Communists, Jacobins, Enemies of Order, of society, and of you.

St. Ambrose says, in express terms, that “property is usurpation”. St. Gregory the Great regards landed proprietors as so many assassins:

Let them know that the earth, from which they were created, is the common property of all men; and that, therefore, the fruits of the earth belong indiscriminately to All. Those who make private property of the gift of God, pretend in vain to be innocent! For, in thus retaining the subsistence of the poor, they are the Murderers of those who die every day for want of it.

What an incendiary vagabond is this ‘Venerable Father!’ St. John, called from his eloquence, Chrysostomus, or Goldenmouth, says,

Behold the idea we ought to have concerning rich and avaricious men. They are robbers who beset highways, strip travellers, and then hoard up the property of others, in the houses which are their dens.

St. Augustine says on the subject of inheritance,

Beware of making parental affection a pretext for the augmentation of your possessions — I keep my wealth for my children — vain excuse! Your father kept it for you, you keep it for your children, and they will keep it for theirs, and so on. But in this way no one would observe the law of God!

Who is the robber? It is he who appropriates to himself the things which belong to All. Art thou not a robber, thou who takest for thyself the goods thou has received from God for the purpose of distributing them to others? If he who steals a garment be called a robber, ought not the possessor of garments, who refrains from clothing the naked, to be called by the same name? The bread thou hast stored belongs to him who is hungry; the garment thou keepest in reserve belongs to him who is naked; the sandals thou hast lying by belong to him who goes barefoot; and the money thou hast hoarded — as if buried in the earth — belongs to him who has none.

Louis Blanc is a very tame and moderate person, I think, compared with the Communists I have just quoted. [ Louis Blanc (1811–1882) was a leading socialist member of the French provisional government established in February 1848. Following the counter-revolution of the June Days he was driven into exile and lived in London.]

How comes it that you, soi-disant preachers of the gospel of Christ, never take these or similar extracts from the “Fathers of the Christian church”, as texts for your homilies? I have frequently heard you quote from St. Augustine on predestination and grace, but you preserve a mysterious silence regarding St. Augustine on property. It is because you neither teach the Christian idea, nor do you live in it; because you are a set of pitiable imposters. You do not even make a profession of those precepts of Fraternity taught by the Nazarean, and said by him to contain the true spirit of his religion. You wisely keep silence on such points, else—out of your own lying mouths—would you be convicted. You leave an immense and ever-increasing mass of destitution and ignorance, and crime, lying untouched at your own doors; you enter no protest against the system of civilisation—rotten to its very core—which has produced, and which fosters, this hideous state of things; but you fly to the uttermost parts of the earth—to China or Timbuctoo—in search of objects for the exercise of your boundless and overflowing

Christian charity; and some among you have been found impudent enough to raise objections when others have proposed doing somewhat to enlighten the ignorance of which I speak. Pah! one’s very soul is sickened by such atrocious humbug. Is the democratic idea expressed with greater fidelity in any other phases of the civilisation now extant? In class legislation? In the exorbitant price of Law, whereby what is called Justice is placed beyond the reach of any save the Rich? In the Knowledge Tax? [The ‘Knowledge Tax’ was the Newspaper Stamp Duty, which was finally abolished in 1855.] In the scanty measure of sectarian education dealt out to us by priests? In our system of indirect taxation, whereby the public burdens fall heaviest on the class which is least able to support them? In the law of primogeniture, whereby one member of a family is ‘made a gentleman’, and the rest left beggars, to be kept by the producers — as state priests, bureaucrats, soldiers, pensioners — whose name is legion? In a caste of hereditary legislators? In the position of women, who are regarded by the law not as persons but as things, and placed in the same category as children and the insane? Society, as at present constituted, is directly opposed to the democratic idea; and must, therefore, be remodelled. To ask, my proletarian brothers, is one thing, but to get is another thing — a hopeless thing, I should say, from a government which does nothing unless compelled by the pressure from without, and which — instead of being its proper place — at the head of advancing society, disgracefully lags in the rear.

From Helen MacFarlane: Red Republican: Essays, Articles and Her Translation of the Communist Manifesto 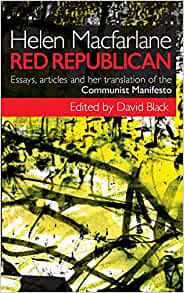