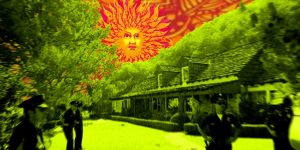 New review. “A great read… a dramatic, almost Chandleresque narrative.” David Black on American nightmares revisited, in “CHAOS – Charles Manson, the CIA and the Secret History of the Sixties,” by Tom O’Neill.

“O’Neill studied the bestselling book, Helter Skelter, by Vincent Bugliosi, lead prosecutor at Manson’s trial. Bugliosi’s case went as follows. Manson was a huge fan of the Beatles, and believed that the lyrics on the White Album were somehow addressed to him personally. Tracks such as ‘Helter Skelter’ and ‘Little Piggies’ were taken to mean ‘the black man rising up against the white establishment and murdering the entire white race’. The Manson Family would escape Helter Skelter by taking refuge in a bottomless pit in the desert (‘a place Manson derived from Revelation 9’) and breed until he had 144,000 followers to take over the world. To O’Neill, this fable of bat-shit craziness didn’t explain anything. Bugliosi himself said in an interview with Penthouse in 1976 that he believed while Manson’s followers believed his Helter Skelter bullshit, Manson did not. In which case, why did he organise the murders and how could he have manipulated his followers into carrying them out?2 Bugliosi, as O’Neill was to discover, was corrupt, greedy and (according to his own family) psychotic. ”